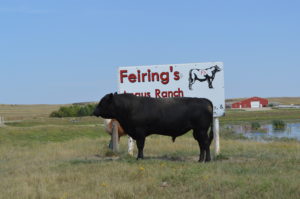 Feiring Angus Ranch, located three miles east of White Earth, North Dakota, is owned and operated by Doug and Ceylon Feiring, sons Brett and Brady and daughter Shambre. Our ancestors, including two of our great grandmothers who staked their claims to the land before they married their husbands, came to western North Dakota as homesteaders and chose to settle on the rolling plains near the White Earth Valley. Grandmothers Marie (Kirkebom) Halverson and Clara (Peterson) Feiring spent many long cold winter nights together for company and friendship as they proved up their claims to the parcels of land they had chosen as their own. 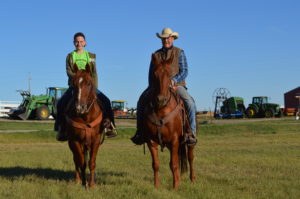 Arnold, Doug’s grandfather, purchased his first Angus cattle in 1945 and bought his first registered Angus cattle in December of 1953. Arnold became a life member of the American Angus Association on February 23, 1955, and began the tradition of producing superior Angus cattle for the commercial cattleman.

Many things have changed over the years, but the ideals and philosophy behind our breeding program have not changed. We still strive to produce cattle that will return the most profit with the least inputs and labor. 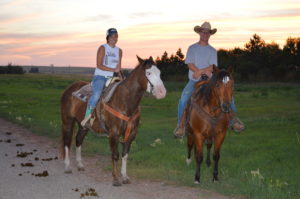 Our parents and grandparents have passed their knowledge and learning to us, and we continue to learn lessons as well. My grandfather and father both advised me never to overstock pastures with more animals than the land can handle. My grandfather received that same lecture from his own father.

We in western North Dakota live in a harsh environment with a lot of extremes in temperature and weather conditions. Weathermen might talk about the average annual weather for our region, but we are always warmer, colder, wetter, or drier than the average. We have a standard saying passed down through the generations that reminds us that even when conditions look their best, we are only a week or two away from a drought situation. Prepare for the worst and hope for the best. 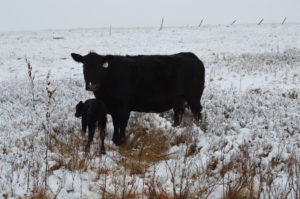 We’ve suffered through droughts and hard times, which have proved to be blessings. Many people try to improve, or push genetics beyond a balance with Mother Nature. Mother Nature does a far better job culling and selecting cattle than man does! We have bred cattle that thrive in the weather extremes that North Dakota faces routinely. We are truly blessed to have been able to work with livestock and Mother Nature for the past six generations and we pray this can continue.

Tom Burke, the breed’s best marketer, asked me once why I didn’t use the most popular genetics in my breeding program. My reply was simple. “Popular’ or trendy cattle are only popular for a year or two and then along comes another trend with its popular bull that people use to try to fix all the problems the first trend created. In other words, many breeders have no program.